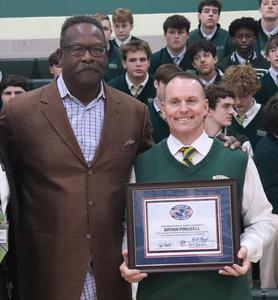 Patriots Executive Director of Community Affairs and Pro Football Hall of Famer Andre Tippett visited Feehan to make the presentation. Pinabell’s honor comes with a $1,000 gift from the Patriots Foundation to the school.

Pinabell’s Shamrocks have won six straight games and will play in the Division II semifinals against King Philip High on Friday. The win streak includes playoff victories over Peabody High and Reading High, both of which were undefeated before facing Feehan.

“Congratulations to Coach Pinabell and the Shamrocks on an impressive win over Reading and advancing to the semifinals,” Tippett said. “Coach Pinabell has done a tremendous job building up this program and his players.”

Led by 26 seniors, including all five starters on the offensive line, Feehan has rebounded from losing its first three games this season and now sits one victory away from the program’s first Super Bowl appearance since 2012.

“(Coach Pinabell’s) work is reflected in the number of seniors who began their high school careers with him and are now excelling in the game,” Tippett said. “Despite a slow start, Bishop Feehan has battled to give themselves a great shot of making it to the Super Bowl. We wish them the best of luck!”

Shamrock fans can see clips of Tippett’s visit and presentation on “Patriots All Access”, which airs Friday at 7 p.m. on WBZ-TV in Boston. The feature will be available on patriots.com as well starting later Friday evening.

This is the 27th year that the Patriots have joined the National Football League in conducting the High School Coach of the Week program, which recognizes outstanding high school coaches and promotes youth football throughout New England. At the conclusion of the fall, one of the weekly winners will be named the New England Patriots High School Coach of the Year and will receive an additional $2,000 contribution towards the school’s football program.

Fans are encouraged to nominate any New England high school head coach who leads a team to an exceptional win, a record-breaking performance or reaches a personal career milestone by emailing [email protected]. All nominations must be submitted following a team’s Friday night or Saturday afternoon game to be considered for that week’s Patriots High School Coach of the Week award.

The Patriots Foundation is the non-profit through which the Patriots support charitable and philanthropic organizations throughout New England. This support comes in the form of direct grants, in-kind donations and player appearances. The foundation assists a variety of charitable organizations and programs throughout New England by supporting their educational, family and health initiatives.